For several years, ballet flats have been a very popular choice for women – either for work or play. But marrying ballet flats and orthotics together has been very difficult.

The challenge has always been that ballet flats are generally unsupportive, shallow and almost impossible to fit orthotics into. Most of the time, there is usually no removable insole to supply enough space to fit an orthotic within the shoe. Whilst many women choose to wear ballet flats in the workplace, podiatrists have generally been frustrated in their attempts to design orthotics to suit these shoes, because of these compromised features. However, our new Orthema dress orthotic designs can usually get around these barriers! 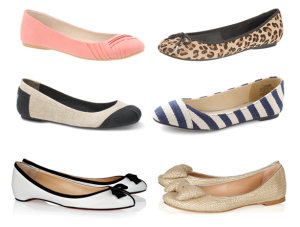 Our Orthema dress orthotics can be made to suit a wide variety of ballet flats (and court shoes), due to our careful design process which ensures the orthotic sits very low within the shoe, with a minimum of bulk. In most instances, our dress orthotics can be milled down to a remarkable 1mm thickness, but still remain a full-length device within the shoe. In some instances, we may need to convert the device into a 3/4 length orthotic, but usually this is unnecessary.

Dress orthotics should be seen as a ‘compromise’ between the efficacy of a standard full size device, and the practicality of allowing orthotics to be used in the most popular shoes styles. Whilst most men will not have this problem, for women it can be a frustrating experience when the only shoes they can fit their standard full size orthotics into are so-called ‘grandma shoes’. At The Podiatry Practice, we recognise that finding a middle road between practicality and effictiveness, whilst still allowing reasonable freedom with shoe choice is paramount to better outcomes in orthotic therapy.

If you have a foot problem which requires orthotic treatment, call us today to discuss our orthotic options to suit contemporary ballet flats and similar shoe designs.

Call or Email Us